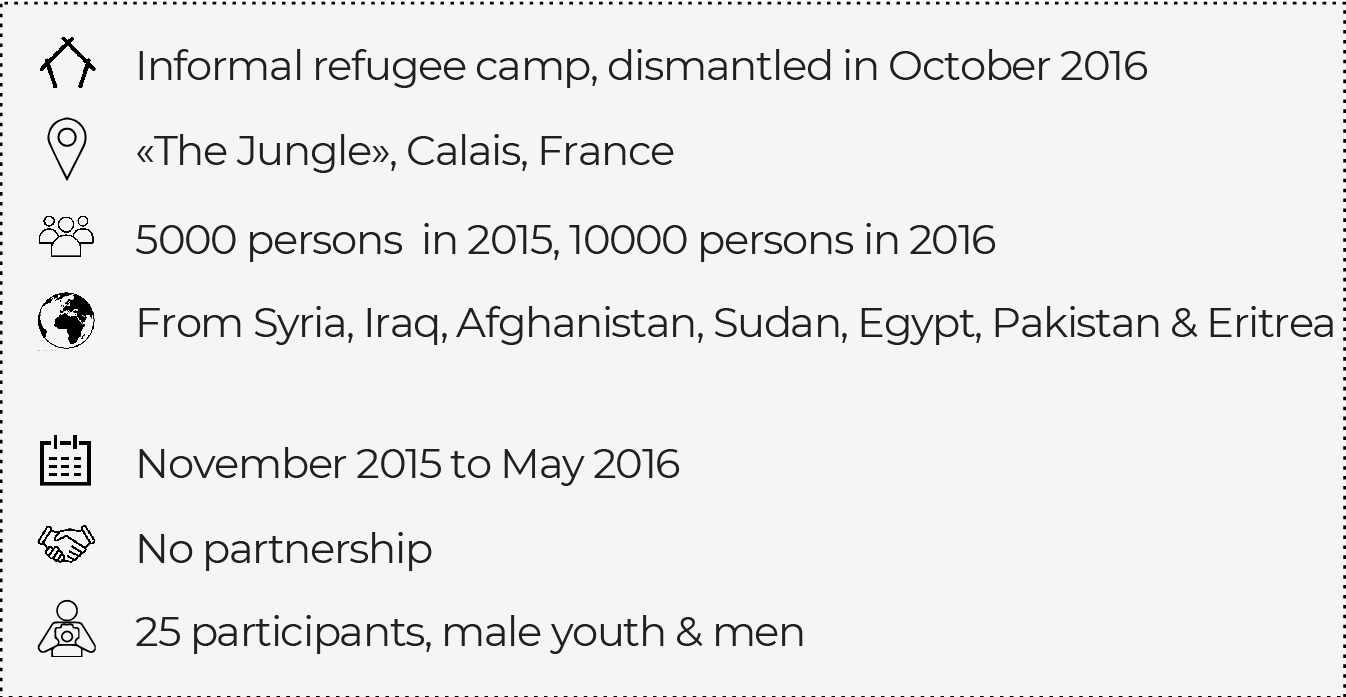 The refugee camp known as the Jungle was settled in an industrial zone on the
seaside, strategically located between the port and the Channel Tunnel. Over 14
hectares, these sand dunes were once an industrial dumping site of Calais as well as
a former summer camp complex. Jungleye’s initial concept was to delve into of the
history and metaphors of the place itself. Exploring the dichotomy of the place—an
area that was once both a holiday camp and a dump became a focal point for the
workshop.
Many associations, NGOs and volunteers helped the refugees living at the Jungle, but
most groups provided activities and aid that targeted children and/or women despite
the fact that the majority of the camp was male youth and adults. Recognizing that
the men were also vulnerable, Jungleye decided to work specifically with men.

One of the first goals in Calais was to give an identity, a name, and an image to refugees
who were more often perceived as a single human mass and not as individuals. The
Jungle refugee camp quickly became a real “city” with its own businesses, social
places, neighborhoods. In a very dynamic atmosphere, the camp was characterized
by continuous movement, basic social interactions and this feeling of creation in all
parts of the camp. It was through this sensibility that the creative laboratory known
as Jungleye was born.
As the classes began to focus on photojournalism, many photographers documented
the permanent violence with the police, the living conditions in the camp, the daily life
between families and social groups, the dismantling of the camp, and the opening of
the new camp founded by the government. Since the tensions with camp authorities
was a constant and looming presence, the participants often worked under the same
kind of duress as photojournalists do. With time and working through the process
of creation; however, the participants began to discover a way to narrate their own
story through images. It was through this assertion of each individual story, that the
participants were able to rediscover themselves.